I will begin by recording our thanks to two of our members for today’s ride: Spencer, who led us but more especially Richard who inspired it. Richard is a keen member of his (and our) community and devotes a lot of time to monitoring the authorities and others to ensure they are held to full account for all they do in our name. It was whilst he was on virtual patrol in our parish that Richard heard about the activities of the Bradshaw family in Westerham and their campaign to raise awareness of Britishness. The British Family Fayre is a product of that campaigning vision and this was the second time the event had been held on a large field on loan from the owners of Squerryes Court in Westerham. 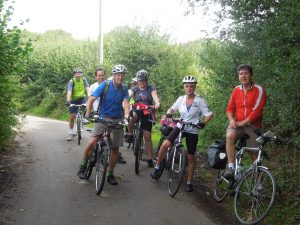 Ten riders met at the Primo Caffe in Orpington High Street at 9.30 am for pre-ride drinks. It would be fair to point out that many riders did not limit themselves to a drink; delicious paninis and similar treats were likewise consumed. That is one of the great benefits of cycling – you pile on the miles and you can also pile on the calories which you burn off during your rides; in the words of a well known TV advertisement ‘Simples’. 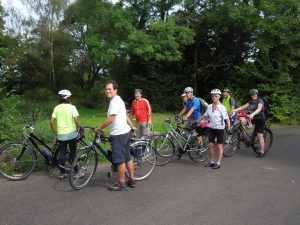 Shortly after 10 o’clock our ride leader called us to the saddle and we set off for the downs. Escaping Orpington in any direction is always a bit of a challenge. Orpington marks the limit of London’s south eastern suburban sprawl and is the interface with the rural lanes of Kent; it is a stone’s throw from the M25 and other major arterial routes where motor vehicles travel at higher speeds, drivers often seem to forget when to adjust to urban driving techniques. More of this a little later. 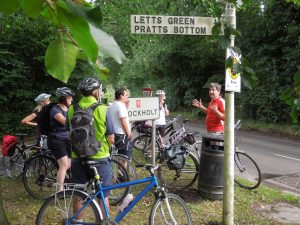 From Green Street Green we followed the shared footpath alongside the A21 to the Cudham Lane turn off and then waited a long time to cross the road at the newly installed crossing point which we had suggested should be traffic light controlled to prevent these lengthy ‘waiting to cross’ times. Eventually we made it over to the car-park of the Rose and Crown and so onto the shared footpath alongside the opposite carriageway. 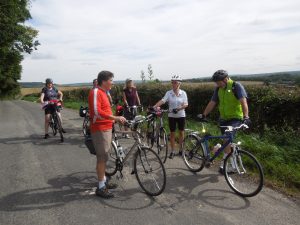 At Rushmore Hill we turned at last onto the quieter lanes and were soon in peaceful and welcoming Norsted Lane. At Budgins Hill we paused outside Fairtrough Farm which, Spencer informed us is, despite its somewhat dilapidated appearance, one of the most successful horse breeding studs in the country. We next stopped at Letts Green a peaceful little lawn alongside a pond by a wooden bench. The information board informs that freshwater shrimps and crayfish can be found in the pool amongst other aquatic wildlife – mosquitoes too I should hazard a guess. A little further on and Washneys Lane became New Years Lane; we passed the New Years Cattery where we could hear loud and sustained BARKING! 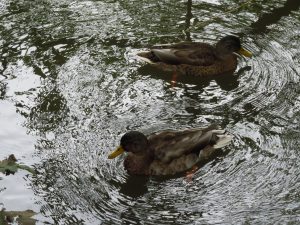 Our journey so far had been uphill all the way from the start as we climbed the back-slope of the North Downs but crossing Cacket’s Lane we continued into Burlings Lane where we eventually reached the summit of our climb, high above the M25. On Brasted Hill we now found ourselves going downhill, and fast, to the Weald of Kent. 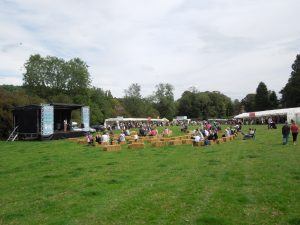 Mid way down Brasted Hill we turned onto the Pilgrim’s Way and bombled along south westwards to Westerham. We stopped in Mill Lane to look at the ducks and Spencer explained that as a youngster this was the limit of his playing area under dire warning from his mother that should he stray beyond this boundary he would be shot by the farmer – seems a bit dramatic! A few hundred yards further on we reached Squerryes Court and the ‘British Family Fayre’. 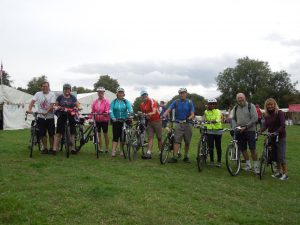 We were welcomed at the entrance by staff who provided us with a free program of events and asked us to pose for a photograph, we were then directed to a cycle parking area behind the fire engine which was manned by a couple of burly looking fire fighters from the Kent Fire Brigade who were proudly showing children into the cab. This seemed to meet with immediate approval from our women riders who led the way to the fire engine and parked us just a little closer than we expected. The Firemen were busy chatting to large group of mothers waiting for their offspring (it has to be noted that there seemed to be more mothers than offspring! Hmmm!) 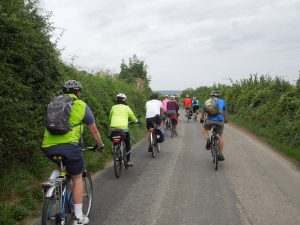 The fayre itself was spread over a large sloping field and was thronging with visitors. There were scores of stands displaying all manner of British produce and goods. The time was 12.15 and Spencer invited everyone to take a look around but be sure to be back at the bikes for 3 o’clock afternoon tea and then the ride back.

The centrepiece of the event was a large covered stage which was surrounded by hay bales for people to sit on. There were various displays and acts scheduled for the stage throughout the day. I will not dwell long on the Fayre, everyone enjoyed the outing in their own way. There was plenty of stuff to buy, and riders returned to the bikes laden with goodies and then went back to buy even more! Amongst the many purchases were bottles of juice, bottles of beer, bottles of sauce, I saw socks, tea, even shoes. British producers did well out of Bromley Cyclists today!

Linda, who had made her own way to the Fayre also joined us. 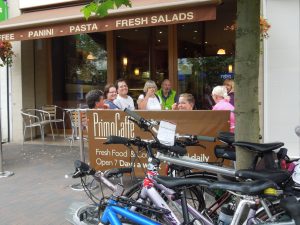 It was around 3.30 when we finally remounted our bikes for the journey home. Once again Spencer carefully led the ride along quiet country lanes until we reached the bottom of Polhill. Polhill is probably one of the easiest of the gradients by which to cross the top of the North Downs. Accordingly it is heavily used by motor traffic. It has two lanes for the ascent accept for a few hundred yards near the top. It is a long steady climb which all riders tackled with skill and ability and we all soon made it to the top despite the increased weight of the bicycles weighed down by the shopping.

At Hewitts Roundabout we gathered into a tight group and crossed in a block without mishap into Court Road (the A224) Orpington By-pass. It is rare in my reporting for me to dwell on dangers faced by cyclists, most of our rides are along the quieter roads and so we avoid conflict but I cannot let our passage along Court Road pass without remark. This is a highly dangerous road for cyclists. Many motorists on this road have just come off one of the busiest, fastest (when not blocked) and most famous motorways in the world. They have perhaps travelled hundreds of miles at very high speed and are now having to adjust not to rural driving but to suburban driving. The speed limit on Court Road is 50 mph. This is bonkers, there is no need for such a high limit, there is no excuse, the speed limit should be cut to 30 mph and there should be traffic calming measures added to the road to force drivers to reduce their speed and adjust to the new setting so they have proper control of their vehicles as they enter suburbia.

One driver in particular in his haste to turn onto his drive left hooked one of our riders very narrowly missing her and causing a lot of distress. The ride leader will be paying a visit to this driver and if we don’t get a contrite apology his registration number and address will be published here and the whole matter referred to the police.

It was just after 5 o’clock when we pulled onto the forecourt of Primo Caffe for a post-ride cup of tea and a debriefing. This was a further excuse for more food for some riders, but as we had done the miles the treats were well earned. Oh how we love cycling!

I will close by repeating my thanks to Spencer and Richard, but also to all the other riders who were great company, great cyclists and made it a great day!