Weatherwise this was a ride of two halves. It was almost tropical at the start; riders were desperately shedding layers to stay cool, but after lunch the clouds had cleared, the temperature dropped and we were all wrapping up to keep warm. Whilst we were not suffering the terrible gales causing all sorts of problems in the North of England and Scotland the wind was a stiff westerly (23 mph according to Carol on the beeb) and was a factor. Of course other features come into play when ride comfort is considered, not least the pace of the ride which has to be matched to the ability of the group, and which our ride leader, Trevor, did very skilfully.

There is something immensely satisfying about a winter cycle ride even in rainy and windy conditions. Don’t get me wrong the joy of a bike ride on a balmy summer’s day is the stuff of dreams, but there is a barren beauty of the English countryside at this time of year and the cyclist who chooses to stay at home actually misses a highly enjoyable cycling experience. There is also a great sense of achievement as one battles with less clement conditions. If you are not a winter cyclist I urge you to give it a go, you might be quite pleasantly surprised. As the saying goes, “There’s no such thing as the wrong sort of weather; just the wrong sort of clothes!” 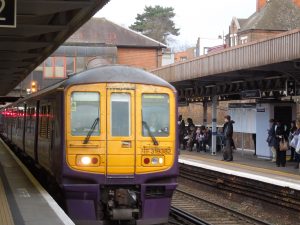 There were nine riders at Bromley South, (another three were on the train as we boarded and one more was awaiting our arrival at Otford), availing ourselves of the GroupSave option the return tickets from Bromley cost £4.60p; I have a feeling we are beginning to feel the effects of repeated above inflation rail fare increases. 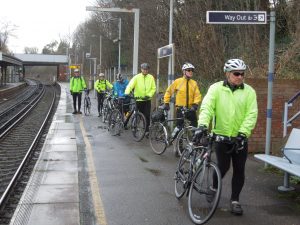 No matter how much this ride is wrapped around cheese and the fabulous fermentation which takes place at the Winterdale Shaw Cheese Processing Farm the outstanding feature and talking point from a cycling view is the infamous Vigo Hill. This prehistoric beast which climbs from Trottiscliffe on the lower plain of Kent onto the ridge of the North Downs should be approached with fear, trembling and lamentation. More of this later. At Otford it was overcast but dry. The forecast was for mid-morning rain. Emerging from the station the short ride up Tudor Drive to the Pilgrim’s Way is a sort of homage to Vigo, and earnest of what lies ahead. The Pilgrim’s Way is an historic east to west route between Winchester and Canterbury. At Otford it nestles beneath the North Downs Ridge it is part of the route which our forebears took in sack-cloth and ashes to make journeys of repentance. Quite what our medieval ancestors got up to which was so wicked that they were obliged to go on pilgrimages one can only speculate about. I am so pleased that we are all much less sinful nowadays and can go on bike rides instead!! 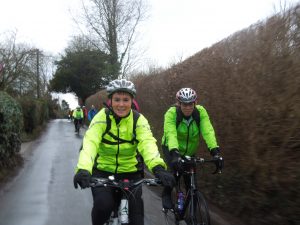 Anyway we were off and nearly at Ightam Mote before the rain really set in. Any thought of stopping to view this National Trust attraction was thus dispelled by rain lashing into faces, soaking wet feet and the constant trickle of water inside collars of waterproof jackets. It probably only rained for about an hour before it brightened up, but we got a good soaking. 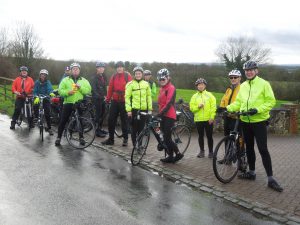 The Rain has Stopped

I would like to say that we all pedalled up Vigo; but it is not so. Some managed it but others were obliged to get off and push, particularly on the section underneath the bridge where gravity defeats strength in all but the most able. It is said that Sir Isaac Newton discovered gravity when an apple fell on his head whilst he was living in Lincoln, I am sure Sir Isaac would have made his discoveries at a much younger age had he ridden a bicycle in Vigo!! Anyway we made it to the top and after a lengthy pause to catch our breath we remounted and pressed forward. The pub at the top of the hill appears to have been converted into a residence, which seems a bit of a shame. I have never visited the premises and don’t suppose I ever would have done but I have previously commented on the external appearance of this premises and I am sure that with the right business plan this could have been a going concern.

We arrived at the farm just after mid-day, there was a stiff breeze blowing clouds swiftly along and the temperature was dropping. We were welcomed by the owner Mr Robin Betts to whom we chatted. Robin told us that if we ring ahead in the future he might be able to provide some teas and coffees, which will be nice. 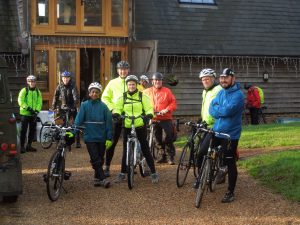 With saddle-bags, panniers and ruck-sacks bulging with cheesy goodies we departed the farm for the short ride to the Black Horse at Stansted were we had lunch. We were made most welcome, though I am not sure that the landlady was entirely happy with our rearranging her restaurant so we could sit together, but she was courteous enough not to tell us off, which we probably deserved!! 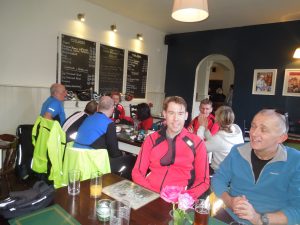 It was a nice lunch, the portions were plenty and I did wonder how some folk were going manage to ride a bike in the afternoon when we still had at least one significant hill to climb. Someone ordered a chocolate fudge pudding which arrived in a coffee cup and in truth was probably sufficient to feed all of us.

Emerging from the pub we prepared to restart. The temperature was now noticeably colder and riders were adding layers to keep warm. We had now turned more towards the west and had the wind in our faces too, this naturally made the ride harder and we realised how much we had enjoyed the benefit of a tailwind in the morning! We suffered our one puncture of the day during the afternoon, and that was probably the difference between the 1614 hrs and the 1644 train back to Bromley South. So no great problem. 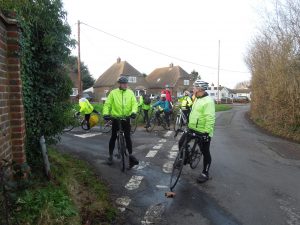 It is a long slog around that back of Brands Hatch and riders took it at their own pace. There were some tired legs by the time we reached West Kingsdown. But then the glory of the Knatt’s Valley, perhaps not quite as attractive as in the summer but still a lovely downhill ride (though we had to pedal because of the headwind) the fields were ploughed ready for new crops, or perhaps the crops were already sown. There is a big sky over Knatt’s Valley; it’s just a very pretty place.

At Farningham the light was beginning to fail, but this is the home straight; we reached Eynsford before dark. At Bromley South some riders called their goodbyes and headed for their homes. But a goodly number headed to the Shortland’s Tavern where we were joined by other friends and some wives and here there was a healthy and extended debriefing over some well-earned refreshments.

A most enjoyable 38.6 mile ride. Hilly; but very satisfying.