It was on the spur of the moment I decided to do this ride today. I really didn’t expect any takers at all, so I was absolutely delighted to receive a message from Tessa to say she would join me. I then had an email from Rob Peters to say he would be coming too.

Tessa had cycled from the other end of Beckenham near the Penge Border and was waiting for me at Shortlands. It was biting cold and there were flurries of snow in the air. We didn’t hang around and set off for the rendezvous with Rob at Hewitt’s roundabout.

I had checked with Google Maps to work out how long it would take us to get to the muster point and thought an hour and a bit would do. This turned out to be pretty generous, Tess is not renowned for hanging around, as we all know, by the time we got to Pratts Bottom we were half an hour early, so we pulled into Costa for a coffee and a warm up. It was snowing quite hard by now.

Once refreshed we pressed on and got to Hewitts bang on time and found Rob on his new Carrera (Christmas present to himself) waiting for us.

It was particularly useful to have Rob on this ride as he is local and knows the area well.

The purpose of the ride was to acquaint me, in particular, with this new route which is being created by the borough engineers. I am soon to have a meeting with Mr Malcolm Harris from the borough road planning department, and when I do it will be useful to have a bit of insight into this scheme.

I will not go into my detailed thoughts on the route here, but stick to a ride report following the usual template. 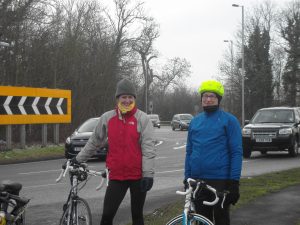 Hewitt’s Roundabout – Keep Your Wits About You

Hewitts was pretty lively being the beginning of the motorway. It’s definitely one of those roundabouts where you need your wits about you. The snow had eased as we set off along the Orpington bypass heading north. Traffic is restricted to a 40 mph speed limit, no one seemed to take much notice – no enforcement, no cameras; just go for it. 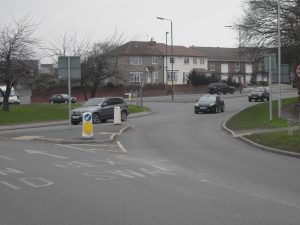 There was a footpath on the left and after a while it became a shared resource. It looked pretty grotty, but once we got onto it it proved much better than it appeared. After a mile or so we turned right down a lane past the Westcombe Park Rugby Club (Sticky) and soon found ourselves cycling through GoddingtonPark. Tessa had charge of the map and was doing a very good job navigating us. Some of the route was even a surprise to Rob who, as I have already mentioned, is local. 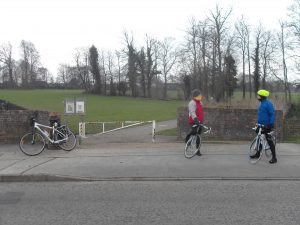 On the far side of the park we headed down into St Mary Cray and then followed the CrayRiver which looked exceptionally clear. On the northern side of the village we joined Sandy Lane. This is a nasty little rat run, narrow and dotted with speed humps. At the top end we emerged at the Ruxley roundabout. We then headed up to Foots Cray and then turned back towards Orpington. The cycle path alongside the Orpington bypass soon led us to the turning back into St Mary’s Cray. We now followed the alternative route southwards, which was fine until we found ourselves at the bottom of a set of steps in Derry Downs. So borough engineers you have some work to do here. 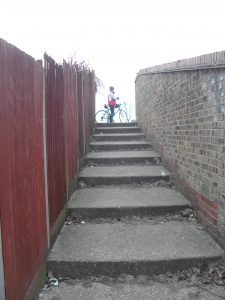 Steps on a Cyclepath!!

By now we were quite cold at the extremities and needed a hot drink. The idea was to find the Croft Tea Room but we overshot and found ourselves outside a café in Carlton Parade where we enjoyed a cup of tea and reviewed our ride. As we prepared to depart the café we met a woman on a fantastic bike which she had just hauled out of her mothers shed where it laid dormant for 30 years so she could pop down to the shops. We chatted to her and gave her one of our cards and assured her that she was exactly the sort of person we would like to come and join us on our rides. She said she would have a look at the website. 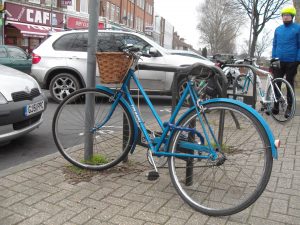 A Fantastic Bike Sees the Light of Day after 30 Years

Having warmed up we decided there was little point in retracing the northbound route all the way back to Hewitt’s so we turned for home. Rob soon peeled away whilst Tessa and I took the quiet route through Petts Wood, JubileePark and Bromley.

My round trip was about 26 miles.

Bromley Council you have much to do to convince me that Cray Valley Cycleway is a desirable cycle route. We enjoyed the outing but I’m far from sure a bunch of novices would have done.