A perfect day for cycling as 12 of us departed Bromley South on this beautiful sunny Sunday morning. Our first stop was Cator Park to pick up Yvonne and one of her Breeze ladies and at the other end of the park Eileen and a friend. Then it was along the lovely Waterlink Way to Greenwich. With several of our cyclists never having cycled that route before, they were amazed at the wonderful tree lined route along the river and there we were in London too. At Greenwich we met Michael with two more cyclists and before setting off along the Thames Path to Crossness we visited The Old Brewery for our morning coffee and cake stop. 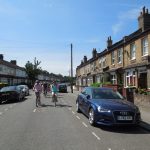 The Greenwich Festival was just beginning and the bands were playing as we left Greenwich to continued our journey in an eastward direction towards Crossness Pumping Station, passing many interesting places along the way, not least the Milennium Dome or O2 as it is now known. 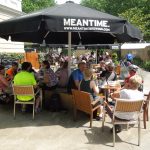 Morning Coffee at the Old Brewery

We were 19 in all now, but we had no trouble negotiating our way amongst the other cyclists and walkers along the path and although very hot there was a pleasant breeze coming off the river, which made it a little more comfortable. 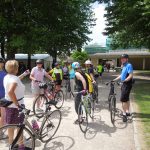 At a fairly leisurely pace we arrived at the Crossness Pumping Station at around 1.45 and were keen to set off and explore, especially the Beam Engine Room, where some of the crossbeam engines had been beautifully restored and were working. 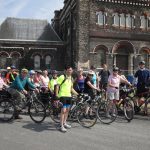 At the Pumping Station

Be back at the bikes by 3pm please, said our leader John and after a very interesting hour or so we were all there ready for our return journey. 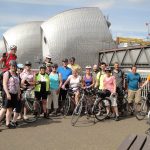 The pace quickened slightly on the ride back to Greenwich, I think this was partly due to a slight tailwind and secondly the promise of an ice cream. Anyway we made good time and did indeed stop again outside The Old Brewary for a well deserved ice cream.

Then it was off again along the Waterlink Way where some of us were lucky enough to spot a Kingfisher by the river, a rare treat indeed. As we made our way back, so people peeled off in the direction of their various homes until we reached Bromley South with only 6 remaining.

A wonderful day out with some great company. Thank you to everyone who joined us and thank you John for another fabulous ride.
Eve Evans

Some statistics for those of you who are interested: