Well, well, this is going to be an interesting write up. As I sit in front of the keyboard I still haven’t thought of a name for it!!

In the middle of the week it was realised by our ride organisers that the Folkestone to Dungeness Ride would have to be postponed due to the Olympic Games ‘bikes on trains’ policy currently in operation. This was disappointing as it was a ride we were all looking forward to.

Anyway our coordinators are resourceful folk and were immediately able to organise an alternative. We would team up with our friends at Pollards Hill Cyclists on their Chaldon Church Ride. 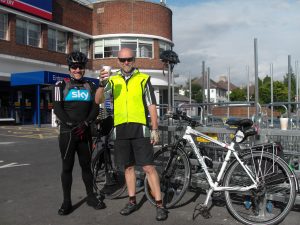 Steve Watkin was at Orpington at 8 am in case anyone had missed the Folkestone to Dungeness cancellation. Finding only Ben in attendance they made a rather lonely start to West Wickham where they found yours truly also somewhat lonely and slurping coffee. The original meeting plan had been changed; Linda, Nev, Steve, Melissa and Helena who had originally agreed to the 8 or 8.30 Orpinton or West Wickham rendezvous had since decided that they would prefer to make their way direct to Fanny’s Farm and pick up the ride there. 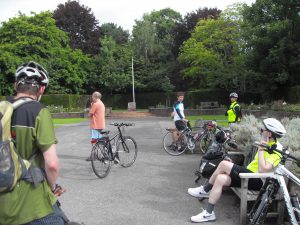 Meet Up with Pollards Hill Cyclists

Steve, Ben and I needed to be at the Carshalton Pond war memorial at 9.30 to meet Pollards so we had plenty of time to take a slow meander through Croydon to the meeting point. The weather forecast wasn’t brilliant but the sun was shining for the moment and it was pleasantly cool. There were just two others waiting at the war memorial when we arrived but it wasn’t long before more showed up, and by half past nine there was a good crowd of 15 or so including us. After a brief discussion with our ride leader, Mark, we were called to order and set off through parks and along tracks heading due south climbing to a high point before the long ride down into Chipstead Valley. We passed the Mayfield lavender farm, but did not stop on this occasion and paused to regroup and catch our breath outside the church in Woodmansterne. The sky was already looking ominous away to our west. Someone spoke to the vicar on his way to or from morning service; we suggested that he might say a prayer for fine weather – perhaps he didn’t hear or maybe the gardeners had got in first. As we remounted the first spots of the old wet stuff were in the air. Some put wet weather gear on then and their, others held off, but not for long. 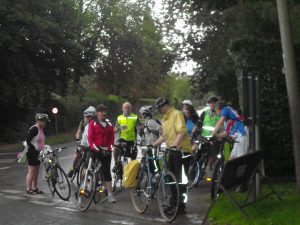 Within a couple of miles we were swamped by sheeting rain. Three of us stopped under the trees for while, the remainder continued to Fanny’s. After a while the trees offered no protection from the downpour so we too pressed on and caught the others up at the farm for shelter, tea and cakes. There was no trace of the remainder of the Bromley crew. Discussing what to do next, Mark pointed out that we were intending to have lunch in a beer garden which, if the rain continued, would not be suitable and he didn’t think the pub would take us all indoors. 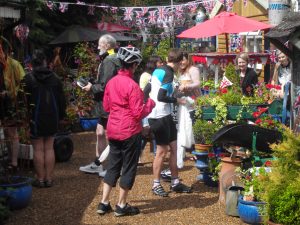 In the Sunshine at Fanny’s Farm

In the meantime Steve was desperately trying to get enough signal on his phone to contact Nev and find out his progress. After about an hour and as the blue skies began to show Mark decided that he would abandon the ride and lead the Pollards Hill team home. Steve however had now received word that Nev and Co were at Bough Beech Reservoir (not at all sure what they were doing there, serious navigation error perhaps???) anyway we decided that as the weather looked more promising we would continue and meet up with them at Limpsfield. Ross from PH joined us.

Bidding our farewells we set off south-east in bright warm sunshine, working on the edges of a couple of borrowed maps. There was a lot of water under wheel, with puddles straddling the whole carriageway in places. Clouds of steam billowed into the air as the sun dried things out.

We joined the A25 at Nutfield, continued eastwards under the lee of the North Downs and made good time to Limpsfield where we located ‘The Bull’ pub in the middle of the village. Here we sat down under a large sun canopy on the terrace and were eventually joined by the others, amazingly they had only experienced the lightest of showers rather than the deluge that had caught us. 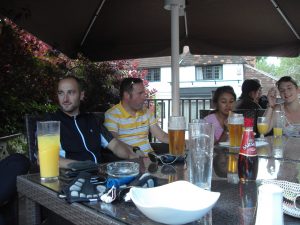 A rather lengthy and relaxed pub lunch followed, we sat and chatted together and heard tales of something called the Petts Woodstock – hmmm the mind boggles. But no matter how much I tried, I could not get the North Downs out of my mind, that great ridge at the bottom of which I was now sitting, and on the far side of which, about fifteen miles away, was my home. I oft heard rumours of those who traverse this great lump of geography never to be seen again.

We reluctantly departed the Bull at about 3.30 and soon found ourselves in the pretty hamlet known as Titsey. This I can now tell you, with some confidence, is the only pretty thing about Titsey.

Readers let me tell you if ever you feel the need to do penance for some misdeed, you can forget about flogging yourselves with fresh stingy-nettles or walking to Canterbury in sackcloth and ashes. No, for the ultimate in self punishment get yourself a bike and ride up something called Titsey Hill. You cannot begin to imagine the pain and effort needed for this horrendous undertaking. Even now nearly 24 hours later I cannot write about it. I will limit myself to commenting that on my arrival at the top, bright red, hoarse and puffing like steam train there were two young, fit, smirking devils who had found the whole episode rather hilarious. Be warned Nev and Steve pain has a long memory. 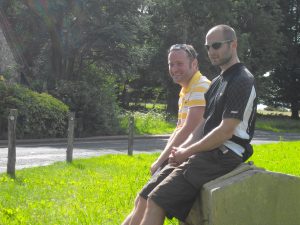 At the top of Titsey Hill

From here the Orpington crew peeled off whilst four of us headed to West Wickham and our homes via Fickleshole and Layhams Road.

So now you can see why it is not easy to find a name for this ride. It wasn’t Folkestone to Dungeness, likewise I don’t think it could be called Chaldon Church. So I have decided that it will be ‘The Terrible Titsey Torture Ride’ but I daren’t put that at the top of the page or no-one will ever come out with us again!!

Thanks to our leaders for a lovely day out.