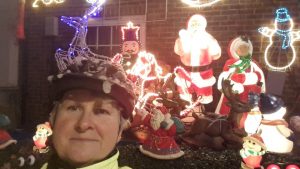 Credit for this lovely ride really belongs to Tessa who planned it, then explored it and then finally led it last year. Unfortunately Tessa was not available to lead her ride again this year so the privilege fell to me, which has meant I have received all the plaudits and compliments really due to Tess. The route includes Leadenhall, St Paul’s Cathedral, Covent Garden and of course Oxford and Regent Streets.

Sorry for the delay in publishing this report. Christmas chores also have a call on my time. Having read some of the comments on Facebook I feel that others have done a pretty good job of portraying the flavour of this outing without any help from me – thank you!!

The weather channel showed a 3% chance of precipitation for Sunday evening so I thought it a good idea to take my waterproofs with me, this proved a wise decision.

As I arrived at the pick up point the first spots of rain soon developed into something considerably more substantial. The growing throng of riders huddled under the canopy of Bromley South Station and watched the as pavements quickly became slick with rivulets of water. Last year the ride started at 5 pm but this year I had got the timings wrong when I published it, so we were an hour earlier. This meant we were actually in no great hurry to set off and as we were at least one rider missing we were content to sit out the downpour in the relative shelter of the station. I would have to concede that we were more than a slight inconvenience to customers rushing to and from their trains, so my apologies to those who had to squeeze past us, which they did without complaint and with traditional British stoicism.

I knew in advance that I was likely to be leading a fairly full ride, it had been published on various platforms including on Sky Local; as an official LCC ride it was of course on their website and on Facebook, Twitter and Meetup; I had received numerous emails about it.

After about 20 minutes the deep dark grey cloud began to give way to brighter patches; and then the rain eased off and finally stopped and I am happy to report that was the last we saw of it. Just after 4.30 as it finally became dark because of the night rather than the weather we were joined by our missing rider and so we set off as a peloton of fifteen. Fifteen riders at night in central London on the last shopping weekend before Christmas would be challenging.

We kept to the east of the A21 and made our way to Downderry Road to visit our first display which was if anything even better than last year. We chatted to the chap who does it all (I’m afraid I don’t know his name) but anyway he told us that the display will feature in a Channel 4 TV programme on Christmas Eve. We stayed for a while and some of us got ourselves covered in fake snow. And then we were off again.

We joined the Waterlink Way at Catford Bridge and here a rider was thrown as he tried to negotiate the poor quality and ill lit dropped kerb leading into Ladywell Fields. I know Lewisham Cyclists have previously complained about this dropped kerb which is not flush with the road as it should be. Initially we thought the only hurt suffered was dented pride but almost immediately on remounting his chain snapped and this resulted in him having to withdraw from the ride. This was a real shame as I know how much he had been looking forward to it.

The clock waits for no-one so once we were content that he would be able to get himself home safely we said our goodbyes and pressed on.

At Peckham a rider suffered a puncture and he too decided it would be better to retire than hold us up whilst he tackled a rear wheel repair in the dark, which I thought was very considerate.

We reached Tower Bridge at about 6.30 where we stopped to take pictures and admire the views we were running about ½ an hour late by now.

And so the tour started. First location was Dickensian Leadenhall Market. It was deserted. We admired the Christmas tree for a short time and then pressed on. The City streets were quiet and we were soon passing St Paul’s; the Bells were chiming 7 as we turned into Ave Maria Lane at the back of the Central Criminal Courts.

Holborn Circus was busy as we continued onto High Holborn and then slipped left towards Lincoln’s Inn Fields. I am never quite clear where the City of London ends and the West End begins but it is somewhere around Kingsway and as we crossed into Great Queen Street we were aware of the increase in tempo.

Covent Garden was beautiful. We stood admiring the ‘moose’ which someone helpfully pointed out was in fact a reindeer – I’m mean really, what else could it be. Which idiot suggested a moose? Well actually that would be me.

On the far side of the square we found a splendid Christmas tree which riders wished to photograph, unfortunately this photo call did not reach the ride leaders ears and on reaching Long Acre he turned to address the team and found exactly no-one was with him. This is where things started to go a bit awry.

Realising what must have happened ride leader retraced his tracks through the Covent Garden crowds and collected the riders, but it seems that not all the riders were collected. As we turned into Drury Lane it was realised that more than half the riders were missing – yikes.

A search party failed to find any trace, whilst mobile phone calls went unanswered. Perhaps they had all been beamed up to the Starship Enterprise. Then at last contact on the phone. The missing ones were in the Strand at Charing Cross.

Eventually they were reeled in and regrouped we set off again towards Oxford Street, you would have been forgiven for thinking it was rush hour on a Friday afternoon. Pavements were crammed with pedestrians and traffic was nose to tail crawling at snail’s pace or slower. Riders who were with us last time commented that the decorations were the same as last year, but honestly they must cost hundreds of thousands and you really couldn’t expect them to change every year. In fairness there was some new stuff to add variety.

South Molton Street was also pretty much the same as last time. We crossed Regents Street and turned into Carnaby Street which absolutely stole the show and definitely has the pick of the decorations for this year. If you haven’t seen it then I strongly recommend going to have a look.

Joining Regent Street we continued in stop start traffic to Piccadilly Circus and then along Piccadilly passing the stunning window displays in Fortnum & Mason’s.

We did not hang around in Trafalgar Square. Each year since the end of the Second World War the Norwegians have sent us tree to mark the end of that dreadful conflict and it is really about time that we modernised its decorations and made it something worth coming to look at. I’m sure after that during the impoverished days after the war a few hundred white lights were considered a very bright peace tribute, but come on Westminster that was 60 years ago it’s time to do something new and modern.

We crossed Westminster Bridge and made our way to the South Bank – it was 8.30, here we indulged ourselves with restorative drinks of hot chocolate and coffee and then set off for Bromley.

Before I close I must just pay a few tributes to my riders who were absolutely fantastic. Most had made a really super effort to decorate their bikes it is difficult to single out anyone in particular but I think I have to mention Tracey and Karen who had bedecked their bikes with multicolour Christmas lights. Karen’s were beautifully threaded into her spokes with a battery pack fixed to the hub whilst Tracey’s were strung around the frame and handle bars – both were most effective. We welcome three newbies who were on their first Bromley Cyclists ride; Deb, Dave and Louise, hope to see you all again. Thank you to Allison for some really tasty ginger cake and to Linda for some ginger biscuits.

No pictures at the moment – my camera doesn’t work too well at night – but if anything gets sent through I shall post it.