This morning we were pleased to roll out the first in our new program of Last Sunday of the Month Rides (LSotMR). The clocks having been advanced to British Summer Time overnight, and it being Easter Sunday, and it being the coldest Easter Sunday since records began, it is fair to say that we did not expect an enormous turn-out.

As Spencer and I were setting up the table display we were soon joined by Eve and other members of the team (one wearing his London Fixed Gear and Single Speed colours – dodgy) the first rider to arrive on her rather posh folding Dahon was Shirley. 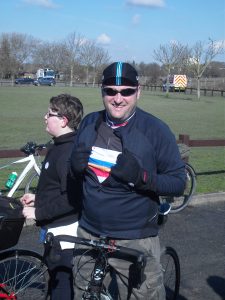 In spite of the freezing temperatures and a really hard frost the sky was almost cloudless; we were bathed in glorious warm sunshine. It’s quite hard to imagine a nicer way to spend a sunny Sunday; mucking around on bikes. 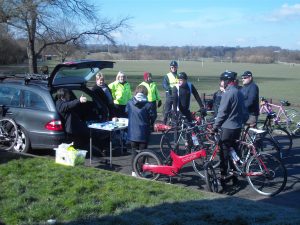 A lovely Sunny day – but so cold!

Then we were also joined by Graham, a friend of Eve. By just after 10 o’clock we had swelled to a group of 12+1 and separated into our three rides. I later learned that three more riders had arrived at the meeting point at 10 o’clock Greenwich Mean Time. Ha ha!

The whole point of these rides is to encourage people who might not otherwise consider cycling to drag that rusty old, trusty old, velocipede out of the shed and remind themselves of the pure joy of riding a bike. There is perhaps no freedom comparable to being on a bicycle. You’re in total charge, you can go where you like and when you like. Most of the road traffic laws don’t affect you. When you come to a footpath you can easily become a pedestrian. The only limitation is your ability to ride; and most folk have far more ability than they imagine.

I led the medium ability Ride Steady group and was assisted by Eve and Linda (my thanx to them for keeping me on the straight and narrow)!

We had all got quite chilly waiting to get started so in order to get the blood flowing and the legs loosened up again we had a spin around the perimeter of Norman Park before heading off towards Petts Wood. James was on his recumbent and commented that it had been in his garage since last autumn so it was a great opportunity to blow some of the cobwebs away.

Traffic on the A21 at the top of Hook Farm Road was relentless and we eventually had to force our way across. No-one was prepared to pause and let a bunch of cyclists cross. Crazy!! You’d be forgiven for thinking we were completely invisible. Once on the western side of the road we were able to follow Eve’s route along the paths by recreation ground and between the houses to make good progress. We could hear the Easter faithful being called to celebrate by some church bells not far away.

Thornett Wood Road was packed with parked cars the occupants of which were scouring the grounds of the adjacent Bickley Manor Hotel for hidden Easter eggs. The JubileePark was crowded with dog walkers; just had a feeling here that our passage through was considered something of an intrusion!!

Emerging from Jubilee Park at Petts Wood we made our way to cafe Maz and enjoyed a cup of coffee or hot chocolate according to taste – Graham paid; many thanks. This gave us a chance to chat and warm up. James had ridden the trail in a short sleeve polo shirt and seemed completely unaffected by the freezing conditions. Us oldies huddled and shivered. Shirley told us her plans to do a bike ride in Groombridge when the weather warms and we agreed that this would be a good opportunity for us to all join up again for a bike ride later in the year so watch our events page and on Facebook. We decided that we would extend our route today a little so that Linda could check out the latest tag at Bromley North. 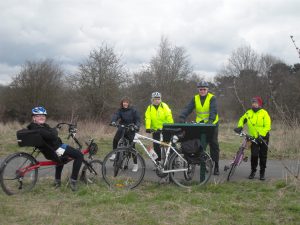 On our return we paused in JubileePark to read the visitor information board telling of the AA gun emplacement which occupied the site during the Second World War. It seemed a world away from the peace and tranquillity of the day.

We met the Ride Well boys and girl as we emerged into Blackbrook Lane and at the end of Tylney Road we met Pollards Hill Cyclists out on their Sunday excursion. Graham was very close to his home here and we said goodbye to him as went to warm himself up.

Linda ‘grabbed’ the tag and we then made our way back to Norman Park along the back roads so avoiding the busy A21, here we found Spencer chatting to a dog walker. Never misses a chance to make new friend does our Spencer.

We all agreed that in spite of the cold it had been a most enjoyable day. Shirley had learned a new route to Petts Wood which she thought she would be able to use.

We said our goodbyes and hastened hither and thither to our Easter Sunday lunches.

Stats: 8miles at 8mph. A special well done to everyone. I hope you now realise that you could ride a lot further quite easily and we hope you will come again and give us the opportunity to prove it to you.