This was another brilliant Andrew Fergar led, train assisted ride. At Bromley we were four when Andrew went to buy the group saver tickets. That is Andrew (obviously), me (also obviously), Martin and Jane. Martin and Jane normally ride with Lewisham so we were delighted to welcome them on a ride. Andrew returned clutching the tickets; at £3.35 per person this seemed reasonable value! As he handed them around we were joined by Chris who has been with us on rides in the past, but not recently, so we were very pleased to welcome Chris too. Chris, fortunately, also had his own travel concession so we didn’t feel guilty about our group saver arrangement.

On the platform we boarded the 0917 to Sevenoaks and were soon on our way. It was a fine sunny day, cold but not frosty. There was a strong wind clearly coming over the North Sea. Bracing? No not really, just cold. But the sun was bright and cheerful and after the recent weather it lifted us all.

Otford is only a few short stops down the line; we departed the train after a 20 minute ride and found Chi, Sue and Colin awaiting us.

So eight of us set off up the very steep hill which leads away from Otford Station. This soon got us warmed up I can assure you. 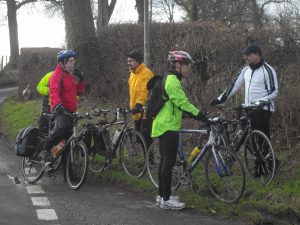 At the top of the hill we turned East onto the Pilgrims Way and keeping the massive geology of the North Downs to our left we started our ride proper.

It is an absolute delight to look out over the Weald of Kent basking in the winter sunshine. The views are fantastic. 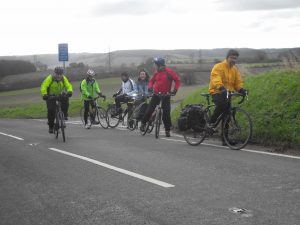 Once we had passed through Kemsing we forked left and began the long hard climb up Old Terry’s Lodge Road, which took us under the M20 and up to the very busy A20. Joining the major road it was only a short way before we turned onto the lanes once again heading towards Stansted. Having quit the shelter of the North Downs Ridge we were now cycling into a very strong headwind which was having a significant wind-chill effect. But with plenty of hill climbing we kept ourselves warm, though I must add that I am extremely pleased I took the trouble to put a track suit bottom over my cycling leggings else I would have been cold. 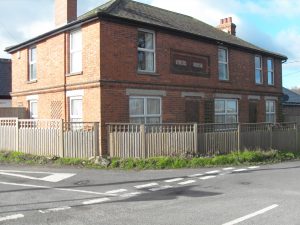 The Whitehorse at Harvel

At Harvel outside the Whitehorse Inn (no longer licensed premises) we had our first puncture. This took a long time; the offending foreign body proved very difficult to locate. The sun was bright but we were very exposed and really got quite cold here. Having completed the repair and as we prepared to restart, Andrew discovered his chain had come off and closer examination revealed that he had two broken spokes in his rear wheel. A temporary repair was affected and soon we were on our way as quick as possible in attempt to get warmed up. 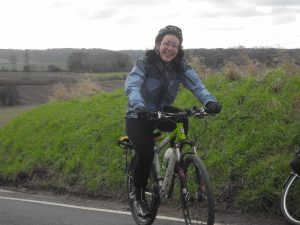 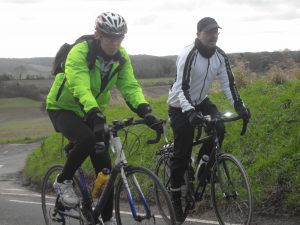 Chi on his final ride with Bromley Cyclists with Martin

Now, when we would have welcomed an uphill climb, to restore the warmth to our chilled bones in some measure, we found ourselves bowling down the long back slope of the downs towards Buckland and Luddesdown. Shortly after mid-day we reached The Ship Inn at Cobham and we welcomed the warmth of this cosy hostelry which was doing a roaring trade on the back of a number of special offers. None of us paid more than £5 for a warming lunch. 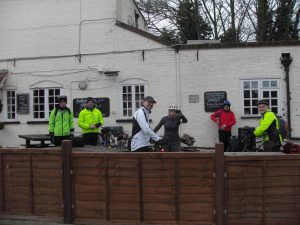 The Ship at Cobham

It was here at Cobham that Sue left us to return home and prepare for guests. We said our goodbyes and set off again. The sun of the morning was now masked by clouds so it was even colder in the wind now but by keeping up the pace we were able to stay warm; I think we all realised how the cold wind even when it is not a headwind saps ones energy. 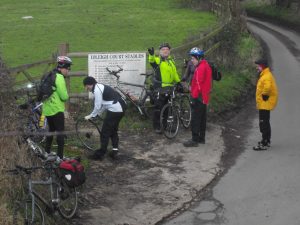 We were making very good progress until, just before we reached New Ash Green, the puncture fairy struck again. Nimble fingers resulted in a much quicker the repair this time and soon we were off on the final leg. 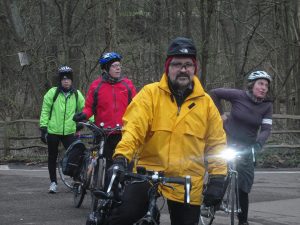 Passing beneath the M20 at West Kingsdown Andrew led us past the head of the popular KnattsValley and took us swooping down the parallel route through Romney Street to Eynsford where we were slightly later than predicted; two punctures having taken their toll on the ride schedule.

Colin and Chris headed off towards LondonBridge via Sevenoaks whilst Andrew, Jane, Martin, Chi and I took the 1617 to Bromley South. Chi left us at St Mary Cray and we said goodbye to him perhaps for the last time as prepares to return to the Wirral whence he hails. Chi has been offered a new post at the company where he worked before he came to London. It is probably fair to say that Chi has greatly missed the North of England during his time here and is looking forward to the return to his old stomping ground. “You have been a great companion on our rides Chi, we wish you well and will miss you!” 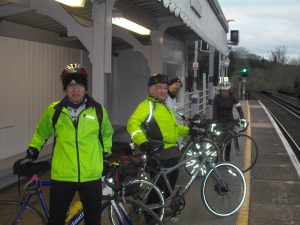 Firstly the roads of North West Kent are in a terrible state following the heavy rain and then the snows of December and January. Road surfaces were covered in debris, grit, gravel, twigs, branches and mud; there was mud everywhere. In places it was hard to pick a route through the mess. There were floods, all passable with care, but one is always fearful of what may be concealed below the surface of the floodwater.

Secondly there were some very courteous car drivers on the road today. Life is full of surprises, at one point a boy racer coming around a bend had to brake hard as he found me picking a route through the mess on the road. As I called my thanks for delaying him I sort of expected a mouthful of abuse! “No problem mate came the cheery reply.”

Finally a sincere thank you to Andrew and his GPS mapping system. We were led unerringly along 35 miles of lanes and tracks with utter accuracy. Another super day out.

More pix in the Yahoo Group see the link on the right!