The official muster point for this ride was outside London Bridge Station at the top of Duke Street Hill. When we arrived there we found eight or nine riders waiting for us. Some had cycled up and others had come up on the train. 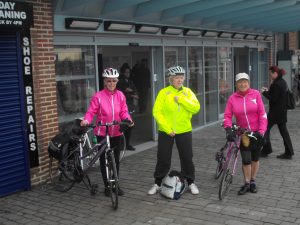 However my ride commenced at Bromley South at 9 am where I met Jenny, Eve and Linda and we cycled up from here. I was pleased to show Jenny the quiet route into central London which she said she didn’t know but soon realised that she did, at least in part.

In spite of a very strong breeze it was a beautiful day. We were bathed in lovely spring sunshine and the air temperature was no longer the icy blast we have suffered for the past month to six weeks.

We were soon rattling along and making good ground. We passed a very recent collision (car versus bus) at Shortlands, a police officer was directing traffic and the ambulance was just arriving. By the time we reached the Brockley Jack we had already stopped twice whilst folk shed clothing to cope with warmth – bliss!!

We passed the Ivy House and saw that there were people preparing for the public meeting. I wasn’t able to poke my head inside and introduce myself which I would like to have done – I had already let Tessa Blunden; the project leader, know via Facebook that I couldn’t attend due to the cycling commitment.

We got to the muster point in good time and, after waiting a short time for other riders coming up on a later train, ride leader Steve Watkin called us to order and gave us a briefing. Basically he told us that he knew the way along the South side of the river to the park but the return journey on the North bank was not familiar so it would be an explorer ride as far as the homeward run was concerned. 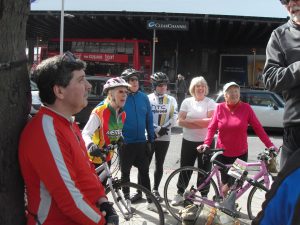 We set off into the heavy traffic around London bridge Station and we will be having a think about whether this is the best place for us to muster for other rides in the future. That said we all got away safely and we were soon bowling along the river front with the sun on our shoulders and a stiff breeze in our faces. There were 15 of us including a young man who had cycled into central London from his home in Hertfordshire with the intention of visiting the London Eye. He had overheard Steve’s briefing and decided to join us instead. I do hope he will forgive me if he reads this but I cannot recall his name. We were also pleased to welcome Albert who joins our rides from time to time with his friend Andrew. Today we learned that Albert is in his eighties. Good on you mate!! 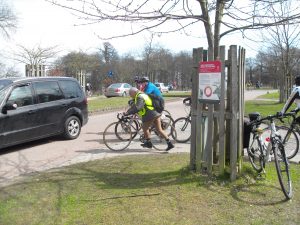 The Thames Path was crowded with pedestrians strolling in the sun, so cycling progress was slower than usual. But we were in no hurry. 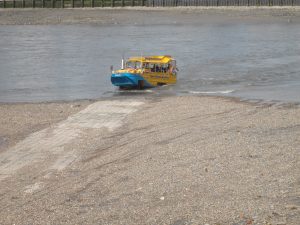 At Battersea we paused for long enough to watch a bright yellow amphibious ‘duck’ which is such a popular tourist attraction emerge from the Thames and turn itself into a road vehicle much to the delight of all on board and us too.

At Putney Steve pointed out the two churches at either end of the bridge and informed us that they were identical (you may need to know that for a quiz one day).

At the Barnes Wetland Centre we stopped to take a comfort break the entire crew stood and watched me carefully lock up and de-rig my bike because I thought we were stopping for a coffee. No sooner was I ready to go inside the cafe I was informed it was time to set off again. Everyone bar me thought this highly humorous.

On arrival at Richmond Park we unsurprisingly found the place heaving. I realised that I had never been to the park before or if I have it is so long ago that I have no recollection of it whatsoever. We saw none of the deer for which the park is so famous. 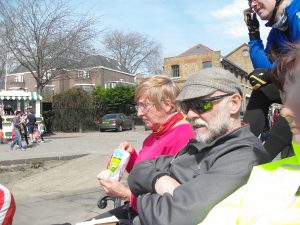 On the far side of the park we dropped down to the river and stopped for lunch. We sat outside the pub in the warmth and just soaked it all up. Fantastic! 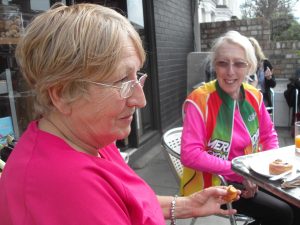 About an hour later we commenced the return leg. We crossed to the North bank of the river at Kew Bridge and here found that the crowded paths of the morning had become an afternoon throng. We attempted to stop for a coffee in the Red Lion by the river only find a queue of about 30 people waiting to be served at the bar.

At Lower Richmond Road we stopped to pay homage to that icon of bicycle building – William Frank Holdsworth outside his very shop. 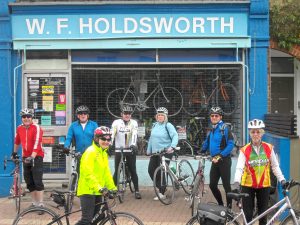 Homage to a cycling god

We pressed on and eventually found a little Italian Delicatessen in Hammersmith Bridge Road where we sat and enjoyed a cuppa. We ran out of seating so Spencer made himself comfortable in the adjacent bus-stop. 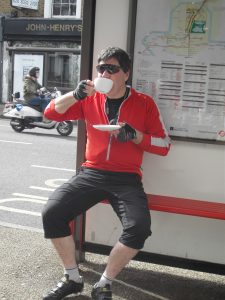 At Wandsworth the hard-core cyclists who wanted to cycle all the way split from the peloton and angled South Eastward. This wasn’t the best bit of the ride. We found ourselves mostly on main roads, but we did make good time. There was the usual moans about the hills on this section of the ride (hey I didn’t make the hills, don’t blame me, and I have to cycle over them too; don’t you think I would like to have a moan as well). It is worthy of note that a certain Mrs Evans rode up College Road to Crystal palace Parade with only one stop and no getting off and pushing.

Crystal palace Park Road is a magnificent downhill ride into Penge. And from here we made our way to the Shortlands Tavern for some restorative and well earned refreshments.

This was a wonderful ride. It really felt like spring today. Roll on the halcyon days of summer.