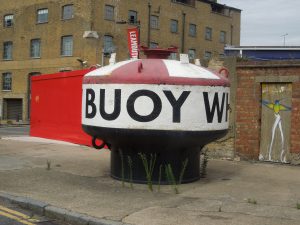 There were fourteen riders on our outing today. Which I thought was pretty good seeing as it was all arranged at the last minute. There were 11 at Bromley South the others we picked up on route. 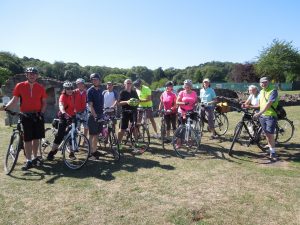 Even at 9 o’clock as we gathered ready for the off it was clear that it was going to be a lovely day. The sun was already bright and hot in a near cloudless sky. There was not even a breath of a wind to stir the leaves. It is hard to think of better conditions for a day’s bike ride.

We delayed a little at the start and this was just as well because there were a couple of late arrivals; it was nearly 9:15 before we finally got going. We made our way out through Plaistow and then past the Sundridge Park golf course to the footpath which cuts through to Mottingham. The path had been cleared since my last visit (when I complained because it was so over grown). Keeping to the quietways we made it to Avery Hill Park where we located Richard and Allison and then on to Falcon Wood where we collected Tracy. The roads were very quiet, in Bostall Heath all the curtains were still drawn; it seemed such a shame that people were not making the best of the wonderful weather. Anyway their loss was our gain because it meant the roads were traffic free and so great for cycling.

The riders today were a terrific crew, you really couldn’t have asked for a nicer bunch. All got on together really well and all I could hear from behind me was lots of friendly chatter. As a ride leader it is so important to know that riders are enjoying themselves, and a real concern if you think they are not. So a special thank you to all today’s team you were a real pleasure to lead. The route today is one that Linda and I have explored and devised, so it is nice get feedback and generally I think riders were happy with our work – a few gentle hills and mostly on the quietest possible roads.

We stopped to take a picture at the ruin of Lesnes Abbey and then headed north into Thamesmead. Thamesmead may not have been the most successful experiment in social engineering from the 1960s but one thing they definitely got right was the cycling infrastructure. The high level paths all interlink beautifully enabling a cyclist to cycle from Abbey Wood to the Thames Path without going near a road. We stopped for a comfort break at The Link Cafe underneath the flyover at Eastern Way. We were lucky enough to arrive as they were offering free cheesy breads so this was a bonus, but we did not linger long.

The River Thames was like a millpond; we turned west, even the industrial shoreline on the far side looked inviting under the late morning sun.

I had checked the timings for the Woolwich Ferry and discovered on Sunday it starts at 11:30 am we reached the ferry at mid-day just in time for the second crossing of the day. I feel obliged to comment that such a late start for such a vital resource is a disgrace, is it any wonder that the case is being made for a Silvertown Crossing this far east. Cars were heavily backed up on both sides waiting to cross.

One of the many joys of cycling is not being affected by queues for the ferry. We rode straight to front and as the last car from the north side disembarked we were waved first on. Likewise at the north side everything was held back whilst we were allowed off first. What a privilege. The crossing took about 15 minutes and we were soon on our way again.

Here I should probably have stayed to the south and found the route to Bow Creek alongside the City Airport however having previously read about the disruption to this route due to the Crossrail project I elected to cycle up to the Greenway and then head east. However when we reached CS3 alongside the A13 it looked so inviting and knowing that timing was a factor I opted for this. It was absolutely delightful to bowl along beside lines of stationary cars heading into Central London. I assume the queues were caused by the triathlon in progress around the Excel Centre.

At 1:00 pm we dropped Eve off at the Airline as she had an appointment to keep. Tim then led us around the rather twisty route to finally bring us to Trinity Buoy Wharf. As we crossed the River Lea on the cycle path we found ourselves cycling alongside exhausted looking triathletes doing the cycling section of their race on the roads which were closed to other traffic.

We had an hour for lunch at Trinity Buoy Wharf. Unfortunately not all the cafés and restaurants were open so choice was a bit limited but it was pleasant to sit in the warmth and natter.

We then returned along the same twisty route to the Airline where we too boarded in pairs for the journey back to the South side of the river (where the air is sweet). 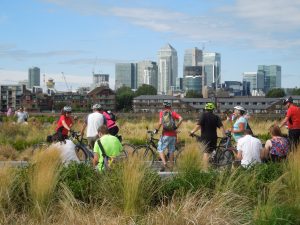 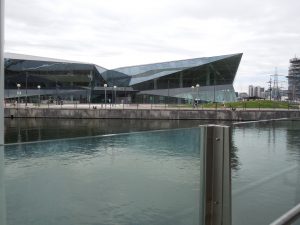 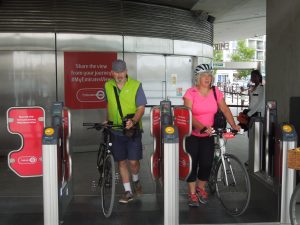 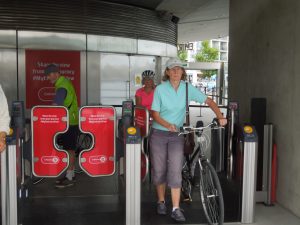 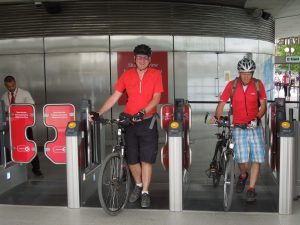 Back on the Thames path we made good progress to old Royal Naval College where we suffered our only puncture of the day. The ever resourceful Tim made very quick work of the repair and we were soon on our way again, but only as far as the bridge over Deptford creek where we regrouped with Richard and Allison who had bought us all a delicious ice cream each. Many thanks Allison.

And so the final leg along the Waterlink Way. We were quite tired by now. The heat of the sunshine having taken its toll. We reached Bromley South at 5:00 pm, so a little later than advertised, where we called our good-byes and headed home for showers, baths and dinners.

A great day in wonderful company. Thank you to you all for coming.