6 riders (Including Linda who joined at Deptford)

One of the great things about this ride is that you are rarely out of sight of water. As five of us set off down the Waterlink way we passed many of the Thames Basin tributaries starting with Chaffinch Brook, then Pool River which is joined by the Ravensbourne River, flowing into Deptford Creek before finally reaching the River Thames under the new Deptford Bridge. 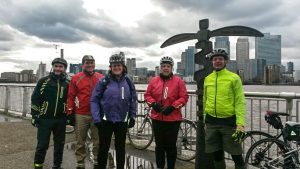 We were joined by Linda at the Red Bus Pizza restaurant in Deptford and once we reached the Thames we headed riverside eastwards through Greenwich towards Woolwich. 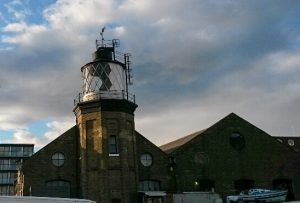 Pedaling along the Riverside path there is a mixture of old and new residential and industrial building.  Most of the path is now smooth paved…we hardly noticed  the sandpit section shortly before the O2. 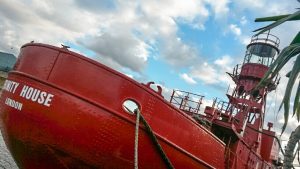 We stopped briefly to take a photo at the Meridian line next to the O2, and also at the Thames barrier, the route also passes by various interesting sculptures, old canons and brew houses. 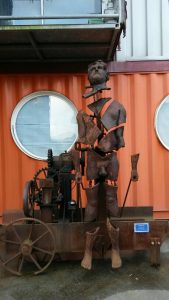 On arrival at the Woolwich Ferry we discovered it was shut (I had checked beforehand).  Not to be thwarted we continued onto the foottunnel, luckily the lift going up was working so we only got to use our carrying skills downwards. 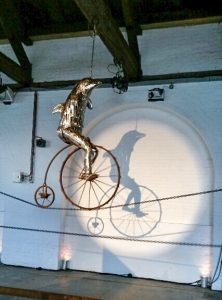 Even the Fish Ride Bikes

Arriving on the north shore we headed right towards Gallions Point Marina, where we were soon back on the (marina) waterfront admiring the university of East London building.   We politely ignored the private property signs and continued waterside to the Excel Centre. We rejoined the road briefly before exiting onto the cycle path which runs alongside the flyover. This is the only ‘hill’ of the route.

A sharp left at the bottom brought us into Trinity Buoy Wharf – it’s entrance marked by a taxi with a tree sculpture ‘growing’ through the middle.

We stacked the bikes and headed into the Creek Cafe (over looking Bow Creek) an eclectic looking cafe with a variety of chairs and a wood burner.  The drinks (coffee, tea and white hot chocolate with marshmellows) went down well as did the sausage and spice soup.  The cake selection was a little uninspiring offering just some croissant or a lemon drizzle cake.

Then we went to explore the Wharf.  Currently there is a sculpture and art exhibition inspired by one mans sail to Iceland.  This included a Dolphin Riding a Bicycle.  There are also some other permanent works and the Faraday Museum which came complete with a box of frogs.  Overall there is probably a lot more to look at and it would be interesting to have a guide of the site to ensure nothing was missed.  We gathered our bikes and headed off.  Circumnavigating the East India Dock Basin we dipped into Canary Wharf for the longest stretch of road of the day.

Back to the Greenwich foot tunnel we returned back under the Thames to the south side and headed back down the waterlink way.  Most of the group headed back to Bromley from Catford.

A very enjoyable afternoon we we agreed was worth repeating when it’s a bit warmer.