Rain threatened as we waited at Bromley South Station.  At first it didn’t look as though it would be a good turnout, but then the Petts Wood contingent turned up, fashionably ten minutes late.

‘Sticky’ Bunn was our leader tonight and we had already been warned there would be a big hill.  We set off up the High Street and then dropped down to Shortlands before our first climb near Ravensbourne.   Four of the eleven had gone to great lengths with their halloween costumes, and we looked quite a site as we hit the bottom of the hill up to Crystal Palace.   For the youngsters this was no trouble and they quickly disappear from sight to wait at the top for the rest of us.   It was worth it because we then had the lovely downhill of Anerley Hill to look forward to and then it was through Elmers End and on to our final destination The Railway Tavern, West Wickham.

Unfortunately a rather stupid BMW driver decided it would be fun to throw an egg at Tim, which was unfortunate.

At the pub Scary Lisa decided to go home to relax on the sofa, while the rest of us spent a most enjoyable evening chatting over a drink.

Well done to those who worked so hard on their fancy dress costumes. 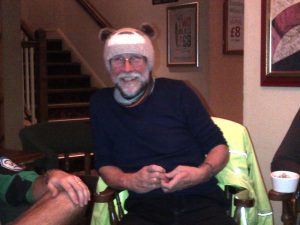 More effort needed with the costume next year Steve

Then it was off for a reasonably short ride back to Petts Wood and Orpington.    We got to Norman Park and were delighted to see that the park was still open.  We cycled through the park and past the trucks and caravans of the fair which was setting up, only to find that the top gates were locked.  No problem for Bromley Cyclists as we squeezed through the gap at the side and Nev lifted the bikes over the top.

A lovely evening, thank you ‘Sticky’ for planning the route and leading the ride.